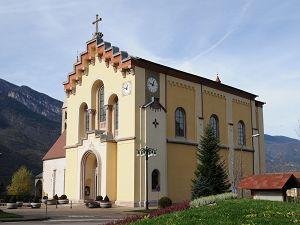 Leopoldo De Claricini was born in Versa, Friuli in 1812. After his studies in Vienna he worked in Innsbruck, Trento and Gorizia. In Trentino he planned several churches among which that one in Spormaggiore, planned and built between 1867 and 1875. The unanimous effort and the enormous sacrifices finally get satisfaction by the solemn consecration by Bishop Mons. Haller September 29 1875. It is in Lombard style, with Byzantine elements, high and bright, wide windows and stones were used.
It is located on the North-South axis, unlike the old church, which accordingly to the tradition should be turned on the Orient. This is a really monumental structure.

The barrel vault, divided into three spans, together with the presbytery and the final basin, cover a surface of 45 meters in length and it is 22 meters high. The vault is held up by 12 column iin red calcareous stone extracted from the nearby mount Fausior. The columns are 10.40 meters high, have a circumference of 3.14 meters and a diameter of 1 meter. The holy arch is held up by paired columns.

The church has three marble altars in Romanesque style. The high Altar before the liturgical reform, stands in the wide presbytery.. 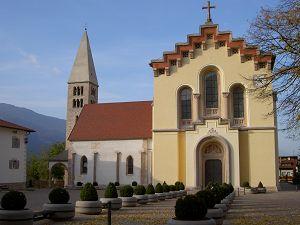 The Altar-piece, portraying the patron Saint of the parish and the nativity of Most Holy Mary, painted by Matteo Tevini from Milan, who also painted the entire church decoration, is placed against the wall of the semicircular apse. The entire picture is concentrated in a unique feeling of wonder both from the angels, witnesses of Mary’s birth, their queen, and from her parents and friends.

The right minor altar named after Saint Joseph, patron of Christian families, has an arch held up by three small columns entirely framed in an elegant battlement.
The left minor altar, manufactured in the same way as the previous one, portrays in its cradle the image of the Holly Hear of Jesus.

It is also worth to remark:

The church has undergone a complete restoration between 2002 and 2005. In 2015 he was chosen as the Jubilee Church of the extraordinary Jubilee of Mercy.